BJMA Krav Maga (must be over 16 years of age) is an ‘easy to learn’ system focused on SURVIVAL using simple and intuitive movements designed to disarm an armed attacker as quickly as possible.

BJMA Instructors bring a level of experience, depth and professionalism to BJMA Krav Maga that is unparalleled offering our students effective instruction.

Krav Maga has a philosophy emphasising simultaneous defence and offence with high levels of aggression, adapted with several different disciplines for civilian self-defence, security organisations, police and military applications, including a focus on global terrorism awareness.

BJMA Krav Maga promotes finishing a fight or confrontation as quickly as possible; attacks are aimed at the most vulnerable parts of the body for maximum effect. While Krav Maga was developed in countries with high internal conflict (including war zones) its principles have been utilised under Australian conditions to be a most effective system in the context of the legalities and use of force restriction,s under Australian law. 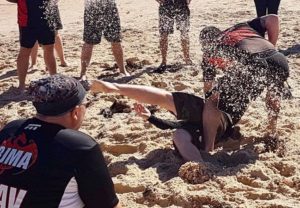 With the global popularity of Krav Maga the effectiveness of this system has begun to be corrupted and watered-down. This distortion has been initiated through the application and inclusion of martial arts techniques by individual instructors which are inconsistent with the basic philosophy and principles of Krav Maga.

The objective of BJMA Krav Maga is to maintain the consistency of its original roots, coupled with the philosophy of continual improvement by redefining tactics to meet environment – specific risks pertinent to Australia and our society. 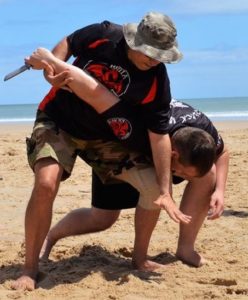 Krav Maga is not a specific style or art in itself; it was developed much along the lines of Zen do Kai, i.e. the best of everything in progression. Krav Maga was developed using techniques from many styles, but incorporates a base set of principles.

BJMA Krav Maga is taught utilising the following base principles: